Let me photograph you in this light!

The best (no) thing in Paris. But nice indeed.

It all started in Paris – the most unromantic place I’ve ever been to.  And now I’m in a state which my friend brilliantly called “Killing butterflies”.


Yep. I am finally afraid. Yes. Of burning up again. But that’s a weird timing as I already feel the smell of croissants in my way.

The expectations are so high that they almost never meet reality. But the unexpected consequences are so thrilling that they always change me in a way.

I really hope I’ll lessen the first and double the second. Next year. Year of 2016. Hope…Haha. Yeah. I still hope.

But for now – let’s have a look at past Paris and  h o p e  that butterflies won’t die but rather resurrect one day.

Opera Garnier. ‘d love to see and listen to Swan Lake in here once.

The PARIS – supposedly the most desired travel destination in the world. Why so?

The glorious past? Sweet old fashioned romantic movies? Sophisticated language or fanciful cuisine? Or maybe those culture geniuses who used to live there in the midst of 20th century? What made you so extremely attractive…

Well. I don’t think it’s this good as everyone imagines. Especially with nowadays threats and fears. And weird people selling tiny Eiffel tower under the real one. And weird and bad and awful cafes with terrible (surely not terrific service (!)) and bad bad food.

So it’s really terribly wrong to be a tourist in Paris. It’s better just to wander. Somewhere where isn’t too crowded… Somewhere where people look to the world not through their lens… Maybe even somewhere where you cannot see the majestic tower or hear the language. Where you do not understand a word but smile makes it up. Somewhere with croissants for 1 Euro and coffee for another. Somewhere where you don’t have to pay for entrance (in Paris?!) to see the pictures of an unknown artist and and where weird guys from weird countries don’t try to sell you Niko, Puna and Abdas.

Yes yes. I’d like to wander there again. Somewhere. With You? Don’t wanna loose you. Yes you. No one. ‘Couse every each one of you made me the way I am. Even those who didn’t. 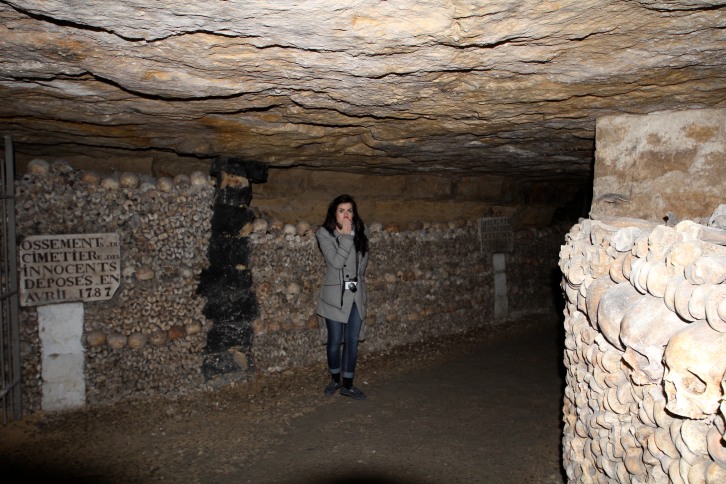 Whoah that was intense. Don’t ever skip Paris catacombs. Don’t do it. Or do. If you’re afraid of skulls, you’re claustrophobic or just… Simply. Don’t like death.

“No man is an island, entire of itself; every man is a piece of the continent, a part of the main. If a clod be washed away by the sea, Europe is the less, as well as if a promontory were, as well as if a manor of thy friend’s or of thine own were: any man’s death diminishes me, because I am involved in mankind, and therefore never send to know for whom the bells tolls; it tolls for thee.”

Yep. This much. Nothing really more to say. But oooh. It’s coming. Exactly when I won’t be tired of writing masters, feedbacks and answers. I’ll write more from there. Yep right there. Where magic happens, where dreams come true in dreams and where I still hope and care and love everything and everywhere.

Adventure’s coming. Yet another one in my life. Bringing me luck, smile, lessons, kisses and friendships and maybe something what I don’t even expect. I HOPE. As these things tend to be the best ever. The best in life and in the whole universe. And I know I deserve it, because I care and I do not give up. Never ever do I do this. No no no.

So salut! For damned Paris, for Strasbourg and for Vilnius. For Tahoe and for China (?) and for everything is yet to come. I know it’s BIG. Oh yes it is.

This is real. A real one. Yep.